Greetings from Turkana High School Center. It’s been an incredible term and we’d like to share some highlights. Thank you for your friendship and partnership as we collaborate to change and impact lives through Christ. 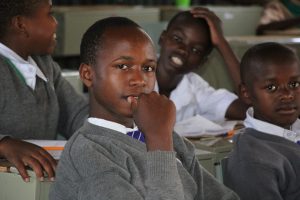 Kevin* is a 19-year-old boy who is now in 11th grade. He started at MOHI Turkana High School in 9th grade in 2019. Kevin is from a small rural town about 43 miles away from Turkana High school. He lives with his father, stepmother, and his six step-siblings. Kevin’s father left his mother after she did not approve of him getting a second wife. Kevin left with his father but his 4 other siblings stayed with his mother.

From the beginning of his enrollment, he was extremely rude to both staff and fellow students. In his culture, he was considered to be a fully grown adult. Kevin found it difficult to submit to an authority other than himself. His unruly behavior would escalate and in one instance, he almost got into an altercation with a member of the teaching staff. It was determined that his bad behavior was motivated also by bad company.

Eventually, Kevin dropped out of school and stayed at home for two terms. By this time, his discipline had deteriorated and he was immersed in drug abuse. He got involved with an older woman in Lodwar town who would take care of his basic needs. This behavior worried Kevin’s father. His father at this point engaged the school to intervene once more.

The school social worker tracked Kevin down and persuaded him to go back to school, to which he agreed. Once in school, he was referred to the guidance and counseling department, which also runs the mentorship program. With extensive counseling and mentorship, the boy’s personal discipline has greatly improved, as has his academic performance. During this time Kevin gave his life to Christ.

Kevin is now an active member of the school’s Christian Union. He aspires to be an engineer so that he can give back to society as well as his family.