We give glory to God for helping us to successfully complete another school term. Thank you for your support and partnership as we work together to transform lives through the hope of Jesus Christ. Here are some of the successes and highlights we want to share with you 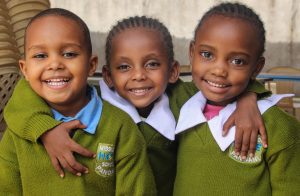 *Eli is an alumnus of the Pangani center who completed his primary schooling with us in March 2021 and is now a grade nine student at MOHI’s Ndovoini center. The 16-year-old is the last born in a family of five headed by a single mother. Eli’s father died when he was just four years old.

After his father’s death, one of Eli’s aunties stepped in to help support the family. She helped to cater to the family’s basic needs which was a relief for their mother. Unfortunately, she too passed away and this plunged the family into a financial crisis. In time, they were evicted for failure to pay and had to seek shelter from friends. Eli’s three older siblings all had to drop out of school because their mother could not afford to pay for their school fees. We, however, thank God because MOHI came into the picture when Eli was recruited.

He joined the Pangani center in 2013 as a grade one pupil and he was a disciplined and diligent student for the eight years he remained there. It was a moment of joy for his family when he sat for the national primary school exit exams, passed and transitioned onto high school. We are glad to report that he has kept the same work ethic at his new school and is working hard to ensure that he has a brighter future. Eli is also an active member of the school’s Christian Union where he also leads devotions.

His family continues to pray and hope that the boy will finish high school and get grades that will enable him to join university. In a family of five where none had been able to attend high school or even sit for the grade eight exams, Eli has changed the story thanks to Mission of Hope!