Greetings from Olturot center! It is another amazing and wonderful school term that the Lord has given us and we are happy to share some of our achievements and highlights with you. Thank you for your support and partnership as we continue working together to transform lives in a holistic way through the hope of Christ. God bless you. 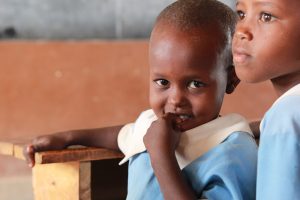 *John is a grade one student at the Olturot center. The seven-year-old lives in a nearby village with his parents and six siblings.

His father is a shepherd, his mother a housewife – the family is not well off because the parents make very little money. They survive by borrowing money from neighbors and as a result, they often will go to sleep without having had a meal the whole day. The home is also in poor condition structurally.

Due to this biting poverty, John was sent to live with his uncle. He would take care of his uncle’s livestock in exchange for food and accommodation. When the Olturot center opened its doors, we approached John’s family and his father consented to him joining the school. He came back home and joined us in 2019 and has been an active, hardworking student since then.

For the two years that John has been in the MOHI program, we have noted an improvement in his health. Having access to two nutritious meals every day has really boosted this young boy’s physical growth. He is now a happy child who interacts well with other students in school. Jacob is also well-disciplined and he has shown keenness in learning the Word of God.  We are excited to see him grow spiritually, physically, and mentally.