Shalom friends! We have come to the end of another wonderful school term and we want to share some of the highlights. Thank you for your support and partnership as we work together to transform lives through Christ.

Sponsor a Child at Nyeri 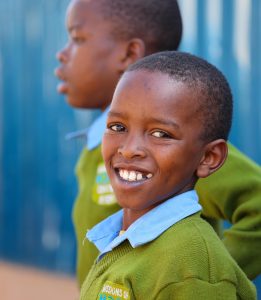 Dan* is a kindergarten pupil at our Nyeri Center. He joined the Center in April 2022, after having been recruited by our social workers who had found him in the nearby slums looking dirty and roaming about aimlessly.

After a lengthy conversation with the boy, the social workers realized that he came from a single-parent home and his mother was a chronic drunkard. Dan was forced to move in with his grandmother who had no job. His mother had had difficulties in previous relationships that resulted in them coming to an end, this dampened her spirits so much so, she no longer wanted to take care of Dan, She had no strength to try and find money to take him to school.

When Dan joined our Center, his mother couldn’t manage to pick him up and drop him off at school at the right time due to drunkenness and negligence. Our social worker and headteacher had previously talked to and counseled Dan’s mother to encourage her to stop drinking, but these efforts felt futile.

One evening Dan was involved in a hit-and-run car accident. Dan’s mother was in so much shock and despair that she sobbed uncontrollably and helplessly. MOHI staff came to intervene on her behalf. We mobilized ourselves to ensure that Dan was taken to the hospital and received the kind of care that he needed. Dan’s mother could not afford to pay for the medical bill so, Missions of Hope took care of the bill to ensure that Dan recovered well.

After nearly losing her son, Dan’s mother had a new appreciation for life and gave her life to Christ. Now she picks up and drops off her son at school every day and has vowed never ever to drink alcohol again. Our Center Pastor is having discipleship classes with her as we encourage her to join an economic empowerment group.

Today, Dan is a happy boy, he attends classes on a daily basis. He bears the scars of the previous accident, but this marks and manifests the Lord’s doing in his family. His dream is to become a doctor and save lives just as his life was saved.