We are glad at Ndovoini Center to have ended the third term of this academic year 2022. It has been the shortest term with a two-week midterm break to pave the way for our National General Election. We thank God that our country had the most peaceful elections ever. We thank you, our partners, for your prayers and support during this term. We had a number of visiting teams coming for tours and distinguished activities in our Center and we were greatly encouraged. We give glory to God for enabling our students to cope with a short and strained term that had many activities. 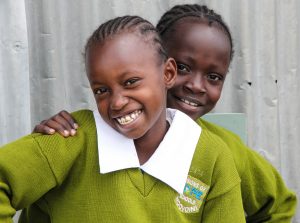 Diana* is 4 years old and in kindergarten. She has two older brothers in grades 3 and 4. They lost their father in 2019 after he succumbed to a short illness. After the death of their father, they were forcefully chased away from home by the paternal grandparents where they were living because of land issues. They then were forced to go stay with their maternal grandmother who was very old.

Most of the time, Diana was left at home with her grandmother when her mother went to look for a job. When she was recruited into our program she wasn’t in good health. An assessment conducted by our MOHI Nutritionist showed that she was nearing severe malnutrition. She had an unending cold, was very weak, and could not talk effectively which made her cry a lot. Diana’s elder brother narrated that most of the time they didn’t have dinner when their mother was not lucky enough to find work.

Diana together with her brothers were enrolled on to our feeding program. Since then their health has really improved. A recent assessment done by our MOHI Nutritionist in term 2 indicates that she has greatly improved. She can now speak effectively and can even afford a smile, and her class performance is improving as she is slowly catching up with the others.

The health condition of her brothers has also improved. Her mother relies on casual jobs so she can now go search for jobs knowing that her children are safe and are in school. Diana’s mom is a prayerful woman and always gives thanks to God for her children. The family’s hope has been restored knowing that one day they will overcome poverty and find a better life. We thank God for the great transformation that has happened to the family.

Glory be to God!