Calvary greetings in Jesus’s Name. We are thankful for another wonderful term of transformation in Molo Milimani Center and the community that we serve. It is a pleasure to share with you the updates for the term. Thank you for your continued support and partnership as we educate, empower, restore and redeem the community here. 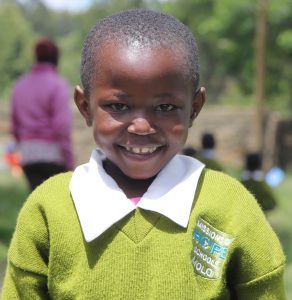 Ken* is a grade 1 pupil in our Molo Milimani Center. He joined our school in 2021 in kindergarten. He comes from a family of 2 siblings and a single mother. Ken’s mother was surviving on casual work with little pay, thus not able to support the family’s basic necessities fully.

Ken’s father and mother had separated. Later the mother remarried and had her second-born son. Ken’s new stepfather felt burdened by Ken and overwhelmed by having to take care of him. As a result, his frustrations would spill over to the mother, leaving her a victim of domestic violence. When we first met her she had totally given up on life and Ken was not going to school because she was not able to pay his fees while she was nursing a little baby.

The staff at Molo Milimani and concerned neighbors mobilized funds to meet the few basic necessities needed so that Ken could join our Molo Milimani Center. His mother had gone through a lot of stress and frustrations that were weighing her down. Having Ken enrolled in MOHI was a great relief to her.

Ken has since adjusted very well to school. He has caught up fast with his classmates and enjoys going to school. His dream is to grow up to be a doctor. His mother has attended various sessions of economic empowerment and counseling sessions that have borne fruit. Ken’s mother has been able to overcome stress and she now fully takes care of her family. With the help of staff from MOHI, she has been able to get a few jobs cleaning clothes and other casual jobs. She also gave her life to Christ after all the encouragement and love received from the staff at MOHI!