Greetings from Mitangoni Centre! Thank God for another great term. We would like to share some of the highlights with you. We are grateful for your support and partnership to ensure the Mitangoni community is transformed holistically. 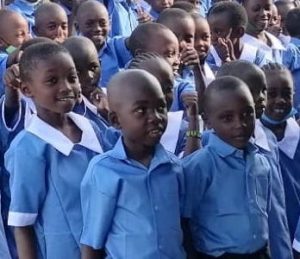 John* is a grade 5 student at Missions of Hope Mitangoni Center. John is the firstborn in his family of 3 boys. He lives with his two brothers who are all MOHI students at Mitangoni Center. Their mother is a single mom and does not have a job. She depends on casual labor like digging in peoples’ gardens and washing clothes for pay in the nearby shopping center.

After the end of the first school holiday, John and his siblings didn’t come back to school. Their family’s social worker visited their home tirelessly, but the door was always closed with no one to tell her the whereabouts of the family. Upon following up with other members of the community, one of them told her that the boys and their mother were waking up very early to go begging in the streets of the nearby town of Mombasa. The social worker had to visit the family at night when they were back. On arrival, she instructed the mother, together with the boys, to visit the school the following day.

John later gave his life to Christ and he had been consistently attending Sunday service together with his mother and his two younger brothers. On the 22nd of September, John was baptized!

He and his family members are no longer going to the streets to beg.

We give God all the glory for the transformation of John and his family.  May they continue to see God’s glory in their lives.

*Names have been changed.