Receive greetings from the Mathare North fraternity. Thank you for your continued support and partnership as we bring transformation to the communities we serve through the hope of Christ. Another wonderful school term has ended, and it is my pleasure to share the term’s update with you, our dear friends. 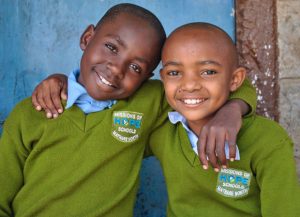 Nancy* is a single mother who lives with her thirteen children. Among the thirteen children, there are four sets of twins. She is also blessed with four grandchildren; one is in kindergarten at our Mathare North Center. Nancy for the longest time has been doing casual jobs to support her family, but due to the hard economic times, she slowly started indulging in drug peddling to provide for her family’s needs.

Through follow-ups during home visits, the family Social Worker and Spiritual Development Officers from our Center encouraged her to stop selling drugs. They would talk to her about Christ, but she was not ready for such conversations, so we had to respect that.

In November of 2021, Nancy was arrested by police and sent to jail in Langata Women’s prison after she was caught selling drugs. The court demanded a cash bail of four hundred thousand shillings ($3300), but since she could not afford it, she had no option but to serve a jail term of one year. However, in May 2022, a well-wisher bailed her out after being behind bars for close to six months.

After her release, Nancy willingly started attending church at Outreach Hope Church-Mathare North. We thank God that she made the right decision to accept Christ in her life and that she stopped selling drugs. To God be the glory for this life that He alone could change.