Receive many greetings in the name of our Lord Jesus Christ. I hope this finds you well. We have come to the end of another wonderful school term and we want to share some of the highlights. Thank you for your support and partnership as we work together to transform lives through Christ. 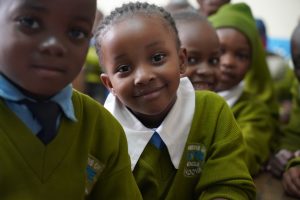 Barry* is 17 years old, and in Grade 8 here in the Madoya Center. He lives in Madoya with his family of 6 children where he is the 5th born. Both his parents work as casual workers with an unsteady flow of income. His parents kept moving from one village to the other and this really affected Barry. Every time he changed schools he was made to repeat a year and this set him back many years. His parents came to learn about Missions of Hope from a MOHI parent and this excited the parents because the school fees were something they could afford. All of the students at MOHI are sponsored, therefore parents only pay a small amount of money known as a commitment fee that maintains the dignity of the parents.

Barry’s behavior started to change when he started 8th grade. He would frequently miss school without good reason. This was largely influenced by the bad company he was keeping. His peers would abuse drugs and be involved in other criminal activities.  During the regular security screenings at the school door before the students are allowed to enter school, Barry was caught trying to sneak marijuana into the school. After talking to him, we realized he was addicted to marijuana. This habit affected his school attendance, his relationship with teachers and other students, and his performance.

This behavior worried the teachers because Barry is a leader and has a lot of influence on other students. It would only be a matter of time before other students would get involved. We took the initiative to guide and counsel him with the help of our Outreach Hope Church Pastor who prayed for him and occasionally set up one on one meetings with him.

Through follow-up and close monitoring, his school attendance and his behavior have improved. His academic performance has also improved. By the end of the second term of the academic year, Barry has become a focused learner. He would report to the administration to appreciate the good work the pastor, teachers, and social worker had done for him. We thank God for his achievement so far and pray that he will continue with the same spirit and be able to pursue a career and become a responsible person in the future.