Receive Calvary greetings from Mabatini Center.  We are grateful to God for another wonderful term. We would like to share with you the highlights of this term. Thank you for your continued support as we transform lives here in Mabatini through the hope of Jesus Christ. 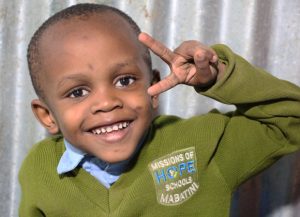 Henry* is in grade four in Mabatini Center. Henry is the second born of a family of 4 boys who live with their mother in nearby Huruma. Henry’s younger brother Tim* was always sickly but the family did not know what the matter was. He was in and out of the hospital a lot. Further tests were conducted only to discover that he has sickle-cell anemia.

Henry’s mother was a casual worker, but most of the time she could not go looking for work since Tim would fall ill frequently. Many times Tim would be admitted to the hospital and his mother would focus all her energy on looking after him. When Tim’s father realized that the situation at home was going to be tough he took off in 2019, never to be seen or heard from again.

From the year, 2019 to 2021 things were tough for Henry’s family. Tim would fall ill and he would be admitted to the hospital for weeks. His mother would also stay at the hospital with him during that period. When that happened Henry would have to step up and take care of his brothers and all the house chores. Henry would have to skip school since his brothers needed him at home. Henry and the family had to depend on kind well-wishers for food. The family went for months without paying their house rent, but by God’s grace, the property owner showed them a great deal of grace.

At some point, things seemed so hopeless Henry’s mother got into a depression and contemplated suicide. The emotional burden became so heavy that she would get physically ill. She decided to go back to her parents seven hours away who nursed her for several days until she was well.

MOHI’s social workers have walked with the family, prayed with them, taken them through counseling, and ensured that Henry transitioned to high school. Now Henry is consistently attending school.

At the beginning of the year 2022, Henry’s mother got a casual job in a market. She was hired to sell vegetables to people on behalf of the owner and she would be paid by commission. While doing that job, she started to save some money. After some months, she started her own business. From this business, Henry’s mother can now settle some bills at home. She is able to provide the family with food, clothing, and shelter. She looks peaceful and cheerful. Henry and his brothers look healthy. Their mother has been trying to provide a balanced diet for Tim to help him stay healthy.

We thank God for the transformation seen in Henry’s family.