Greetings from Missions of Hope Lochoredome center! Another amazing school term has come to a close and we want to share some of the highlights. Thank you for your support and partnership as we work together to transform lives through Christ.

Sponsor a Child at Lochoredome 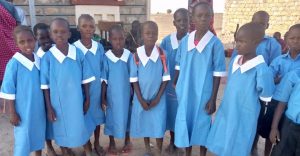 *Philip is a kindergarten student at the Lochoredome center. The eight-year-old comes from a family of three sisters, four brothers and his parents. He was raised in a village at the heart of Turkana where cultural dictates and lack of educational facilities made it difficult for him and his siblings to go to school.

When MOHI set foot in Lochoredome, Philip was one of the students identified as a potential student. At the time, he was herding his family’s livestock and was at the pasturelands throughout the day. The father did not understand why Philip (or any of his siblings) should go to school. He viewed the responsibilities Philip was handling as being a normal part of his culture. We educated him and informed him that by keeping Philip out of school he was violating his child’s basic right to an education. The father eventually agreed and gave his consent and Philip joined our school in July of 2021.

On his first day of school, the excitement on the young boy’s face was evident. Philip was all smiles as he exchanged his traditional attire for MOHI’s school uniform. He was joyful and related well with other pupils from the beginning. While he could only speak in his mother tongue, Philip was eager to learn and he has now picked up both Swahili and English words which makes communicating with him that much easier.

Because his family lives very far from the school, Philip came to live with his aunt who lives some 6kms away from our school. The boy walks the 12km – to and from school – every day, without fail and despite the long-distance he must cover, he is never late and always gets to school looking clean and neat. Once in class, his teacher reports that Philip is active in all the morning devotion activities of singing, praying and reciting memory verses.

He also fully participates in the lessons and he confidently leads others to pronounce sounds in class. His health has also improved greatly due to the school feeding program and the interventions offered by MOHI’s nutritional team. On Sunday, he goes to the local church with his aunt.

We thank God for Philip’s life and for how his father has come on board to fully support his son’s education. The family is hopeful that their son will have a bright future and we are grateful to be able to offer him the tools he needs in the form of quality education.