Hello, and Praise God! I hope you and your families are doing well. We are grateful to our Lord Jesus Christ for a successful term full of activities and events. Now that we are coming to the end of this term we would like to share with you some of the highlights. 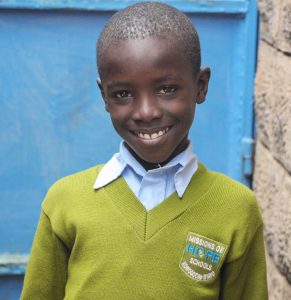 Anne* is 12 years old, and lives with her parents and siblings in the Korogocho Nyayo area in a single-roomed house. She comes from a family of four, where she is the eldest with one younger sister who is in kindergarten.

Upon joining Missions of Hope’s Korogocho Nyayo in 2019, Anne was a very quiet girl. Her dad is a drunkard and would yell at her regularly.  This made it hard for Anne to express herself for fear that someone would shout at her. Her father did not care about her education and most of the time Anne would not concentrate in class. As a result, her performance was below average and this worried her class teacher.

Anne’s mother on the other hand was burdened by taking care of the family. This made her become withdrawn, stressed and unable to care for her children. Anne was left to take care of herself and her younger sibling as the mother was busy doing casual work to provide for the family.

Our social workers started walking with Anne and her family to try to understand the root cause of Anne’s behavior and how they can help. Through encouragement and prayer with the family over the last three years things have improved. Anne’s father has begun to show interest in his daughter’s education. He now attends parent meetings. Although he still drinks, MOHI will continue to walk with him.

All the efforts of the social workers have made a positive impact on Anne. She is now doing above average in her studies and attends school regularly. We thank the Lord that Anne is now able to express herself more than before. She has the confidence to stand up for herself. Her mother is so happy that  Anne has shown great improvement.