We give God the glory for another great term. Thank you for your continued support and partnership in transforming lives through Christ. Here are some of the highlights of the term that we want to share with you. 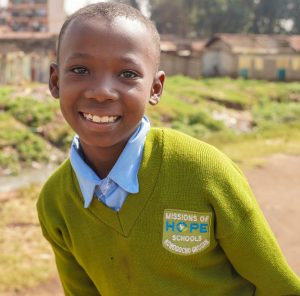 Cindy* joined Korogocho Grogan (KG) Center two years ago in grade five, after she got a transfer from Missions of Hope Korogocho B (KB). Cindy is the firstborn of a family of three, where she and her younger sibling live with their mother. Their parents separated and this really affected the family, especially the children.

While Cindy was back in KB, her class attendance was very low. She would wake up in the morning as if she was going to school, but she would never arrive. After some investigation, they found out that Cindy was skipping school to see her boyfriend. Her mother was very troubled about this and after talking to the headteacher and social workers at KG where she worked, it was decided that Cindy should be moved from KB to KG so that Cindy could come with her mother in the morning. For a short while, this ensured that Cindy went to school.

After a few weeks at KG, Cindy started getting into heated arguments with her mother and she would not listen to her mother. This went on for some time, but Cindy’s mother thought that things would eventually improve. Unfortunately, Cindy’s behavior only escalated, she wouldn’t come home some nights, and she would be found in her boyfriend’s house later. Eventually, she could be seen in the company of different men. By this time her mother was unable to handle the issue on her own. She reported the matter to the headteacher and the social worker to ask for help.

Cindy went through lots of counseling with the headteacher and social workers. For 3 months they walked with Cindy to help her realize the dangers of her actions. Soon a change was beginning to show. Her mother reported that Cindy would no longer spend the night in other men’s homes.  After attending Angaza Discovery Camp Cindy’s outlook on life really changed. She was more open to sharing her mind and allowing people to help her navigate through life.

Now her mindset has changed, she even attends church every Sunday, something that she would not do before. She is an active participant during our morning devotions in class. She has also become a peer counselor who guides her fellow students to be careful of the choices they make. Her mother is very pleased with the transformation. She had been very worried about Cindy and worried Cindy would never change.