Hello, greetings from the Kiwandani Center. Thank you for your continued support and partnership as we transform lives through the hope of Christ. We thank God for the progress we have made this term. We would like to share the highlights of the term with you. 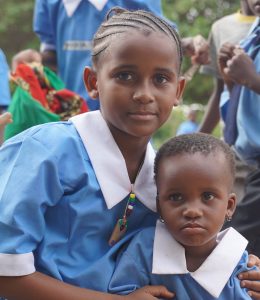 Brenda* is 12 years old and comes from the Kiwandani community. She is the firstborn of a family of 3 girls who all live with their single mother. Brenda’s mother has no formal job and struggled to make ends meet, she would look for odd jobs to do around the community such as cleaning or selling street food.

When Brenda was 5, her mother enrolled her into a public school in Kiwandani, however raising $30 each term for each of her daughters became a tall order. The teachers at the school would send her and her siblings home every day because they had not paid school fees. Eventually, the girls stopped going to school as their school fees arrears were more than they could handle.

Brenda and her siblings caught the attention of our social workers when they realized that Brenda skipped a significant amount of school, so much so that she couldn’t read or write. MOHI took Brenda in. It was difficult to find a class that Brenda could fit in as because of her advanced age. She couldn’t be placed in the pre-primary so she was placed in Grade 1. Brenda was determined to learn and to catch up so she was quickly promoted to Grade 5. With the help of her teachers, Brenda has not only caught up with her classmates but is performing well.

MOHI social workers also found a job for Brenda’s mother so she can support her family. She is a house manager in a nearby home in Kiwandani. If it were not for MOHI, Brenda and her siblings would never have been able to afford an education and a chance to break the cycle of poverty. Brenda would have never been able to receive the kind of educational attention she needed to catch up with other classmates.