Greetings in the name of our Lord Jesus Christ. We thank God for yet another term of God’s blessings. Thank you for your support and partnership as we work together to transform lives through the hope of Christ. Here are some of the successes and highlights we would like to share with you.

Sponsor a Child at Kibarani 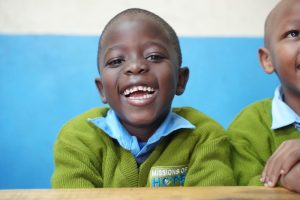 Kevin* is in kindergarten here at the Kibarani Center. He is 7 years old and lives with his parents. When he was first brought to school during the first term,  he was very unsettled. He would scream a lot all day, and rip up both text and exercise books. Neither the teacher nor the social workers understood why the boy behaved in such a manner at that time.

Kevin could sometimes go a step further and bully his classmates and other children from other classes both in class and on their way to the washrooms. The social workers needed to investigate the matter so they went to inquire from Kevin’s parents. His parents reported that it was even worse at home,  they found it difficult to contain him and didn’t know what to do.

While Kevin’s class teacher consulted with a fellow ECDE (Early Childhood Development Education) teacher they concluded that the ultimate solution was to present the need before God in prayer. The report from the class teacher by mid of this term was that Kevin has settled down in class, he can now write well and relates better with other children. Glory to God!