Greetings from Kiamaiko Center! Another amazing school term has come to a close and we want to share some of the highlights. Thank you for your support and partnership as we work together to transform lives through Christ. 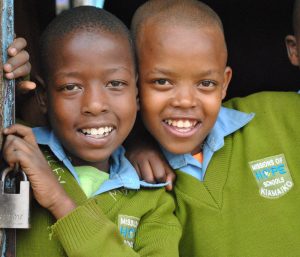 We met Ben* and his family in 2014 while he was in grade 5. One of the MOHI social workers, while recruiting students from the community, noticed that he was not going to school. The social worker took the initiative to talk to the mother and inquire why he was not going to school. Ben comes from a single-parent home. He and his mother live in lower Kiamaiko where the mother is a CHV (community health volunteer). Ben’s mother is living with HIV and had lost hope in life. She no longer had the energy to push him to go to school. After assessing the situation the social worker made arrangements to recruit Ben to the MOHI Kiamaiko Center.

During this period of hopelessness, Ben’s mother was not attending any church and had stopped taking her ART(antiretroviral therapy) drugs. During home visits, the family social worker walked with the mother, encouraging and advising her. The effort the social worker put into seeing her and walking with her restored the mother’s hope and as the days went by, she became more optimistic about life. She started retaking her ART drugs and joined Outreach Ngei Church; she received discipleship and accepted Jesus Christ as her Lord and Savior!

Meanwhile, Ben remained disciplined and focused on his education. In 2017, he performed very well in his final primary school education and later joined Katheka Secondary School. The mother could not believe her son was among the top students in school. With the help of well-wishers, Outreach Ngei Church, and Missions of Hope, the child transited to high school.

All through secondary education, Ben remained disciplined and well-behaved. At the beginning of this year, he sat for his final secondary school exams and managed to score very well. The results were brilliant and we all celebrated his success. His mother was so happy that she said she will never give up on Jesus and will always appreciate God for bringing Missions of Hope to her life.

Ben is now waiting to join a university where he aspires to become a banker.