We give glory to God for helping us to successfully complete another school term. Thank you for your support and partnership as we work together to transform lives through the hope of Christ. Here are some of the successes and highlights we want to share with you. 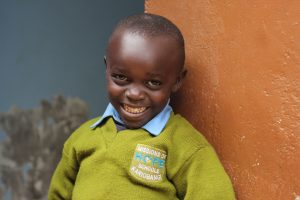 *Jane is a grade two student at the Kariobangi center. She has seven siblings and they live with their parents in the slum area of Kariobangi. Her parents are both casual laborers who rely on irregular jobs and this has made life very difficult for the family.

Before Jane joined our school, she spent a lot of time in the streets looking for food. It was here that our social worker first spotted Jane, roaming around in the community on a day that she should have been in school. The social worker accompanied Jane to her home and was able to ascertain that the family was in need. There was no food in the house and the children, as well as the mother, were very dirty and smelly.

The social worker talked to Jane’s mother and she revealed that they were not in a position to pay school fees for Jane and two of her siblings who were also at home. The social worker shared with her words of encouragement and prayed for the peace of God to be seen in their house. When the social worker told her that her children will be recruited at the Kariobangi center, the mother cried tears of joy saying: “I never thought that my children would ever go to school.”

When Jane reported to the school, we immediately realized that she had disciplinary issues. She was very violent and would beat up her classmates. Teachers tried to talk to her but it was in vain. She was also struggling to keep up with her classwork. We also noted that her siblings were struggling academically and also had poor self-esteem. The social worker conducted more home visits and discovered that the children were witnessing domestic violence on a regular basis. Most of the time, they and their mother were forced to spend the night out in the cold after their father threw them out of the house. Jane’s life was full of violence and she was simply doing to others what she saw done at home.

Armed with this information, we started having regular counseling sessions with the girl as well as praying for her family. Her character development was very faulty and we realized that she did not have a clear concept of good versus bad behavior. It has taken a lot of patience and prayer as we offer these children guidance and slowly we are seeing a change in their behavior.

In December of this last year, Jane received a gift from her sponsor. She was very happy and this encouraged her to continue being a good girl. Receiving this gift helped to really motivate the young girl and we have seen her adopt even more good behavior and also become more focused on her studies. What a privilege to see God working in this young girl’s life.

We still have a long way to go in bringing holistic change to this family, but we thank God for the many wins we are witnessing. Please keep Jane’s family in your prayers that they may all get to experience the transformative power of Jesus Christ.