Greetings from the Kariobangi center! We have just finished an incredible school term and we would like to share some of our highlights with you. Thank you for partnering with us as we continue to share the hope of Christ! 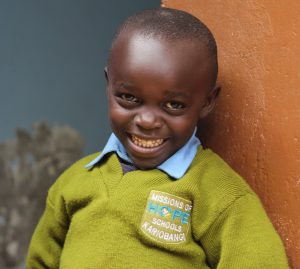 Riley* is nine years old and currently in grade one at the Kariobangi center. He has moved to grade two on July 26th this year and he is excited to be in school. He also has a younger sibling who is a kindergarten student, also at our school.

Riley lives with his single mother and his seven siblings in the slums of Kariobangi. His father abandoned them in 2018 – before they were recruited into the MOHI program – and married another woman. He now lives in a neighboring community with his new family and does not support his first family of eight children.

Riley joined our program in January 2019 as a preschool student coming from a neighboring school. His education was very weak and this had made him remain in the lower classes for longer than expected. When he came on board, everyone could tell that the boy was coming from a very harsh and complicated background. He would barely smile or interact freely with the rest of the children. He was violent towards his classmates and also with some female teachers and we had to handle numerous discipline cases with him. We had to apply “Love and Logic” techniques in order to reach him and to draw out the pain and bitterness he seemed to be carrying from his unfriendly home environment.

When MOHI first had its interaction with this family there were many issues and challenges that were pulling them apart. We were able to find out that the father was an irresponsible drunkard who did not care about his family’s welfare. There were reports of domestic violence in the family with the father accused of being physically and verbally abusive towards his wife and children. Riley’s mother had reported the situation to the local administration but there was no help coming. For her part, the mother was engaged in the illegal activity of brewing local brews in the house. She was arrested several times when police would conduct raids. She also had to deal with unruly drunkards all the time. This was the kind of environment Riley and his siblings were growing up in. MOHI immediately stepped in to try and rectify the situation.

The social worker, the school Spiritual Development Officer, and the class teacher joined forces to offer psychosocial support to this family. We worked closely with the mother educating her on the need to provide her children with a good home environment even as we helped her see the effects their current home environment was having on the children. In time, she agreed to stop the illegal business and was able to secure a job as a waitress at a local hotel. She is now able to provide for her children without exposing them to societal vices. As we continued to empower her and share the gospel with her, Riley’s mother gave her life to Christ!

As we saw Riley’s mother make all these changes, we also noted a difference in the young boy. Where he was once sullen and withdrawn, he is now a joyful boy who interacts well with his schoolmates and has made friends with them. In class he is disciplined, attentive and obedient to all his teachers and as a result, his academic performance has greatly improved. He has also identified his talents and likes playing football both at school and at home. He also says his dream is to become a doctor when he grows up and is working hard towards this.

We thank God for the transformation we are witnessing in this family. They are now actively involved in their local church and are growing strong in their faith. The mother has accepted her role as a single mother and is now looking forward to securing a loan from MOHI’s microfinance program so that she can set up a small business to enable her to better provide for her children.