Greetings from Bondeni Center! Another amazing school term has come to a close and we want to share some of the highlights. Thank you for your support and partnership as we work together to transform lives through Christ. 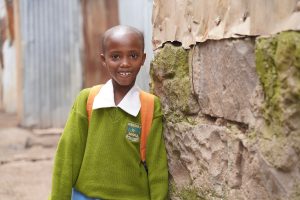 Gift* is a calm and soft-spoken girl. She loves to read, she is very focused on her studies and loves to be in school so much so that she has perfect attendance.

Gift first came to our attention during the school recruitment period. As the social workers were walking around recruiting children for the pre-kindergarten class, one of the community members pointed her out. She was 6yrs old, scared, dirty, very hungry, and looked malnourished. The social worker approached her to try and talk to her, but she did not say a word. No one understood why at that age she hadn’t started school. Gift’s caregiver was not around that day, so the social workers had to leave and come back another day.

To their surprise when they came back, Gift remembered them, she gave a faint smile of recognition and of hope. Walking straight up to the social workers, she held their hands without saying a word and led them to an iron sheet gate. Once they got inside she disappeared suddenly into one of the houses. The environment was unpleasant. There were drunk men sitting around and they could hear them murmur in Kiswahili to the woman selling drinks, “Aki wacha aende shule” which means  “let her go to school.”

Once inside the house, they managed to meet Gift’s grandmother and ask her why the child had not been going to school. She told them she is a hawker (someone who sells goods on the street) in town and the little she gets is not enough to cater to their needs and take the girl to school. She would sometimes take Gift and her son to town to help her earn more. When she carries her son on her back while hawking, the county council officers who do not want people hawking would not arrest her. But when her grandmother doesn’t have bus fare to board a bus to town, she would leave Gift at home alone.

The social workers spent some time talking to the grandmother, educating her on Gift’s rights as a child, and the grandmother’s responsibilities as Gift’s primary caregiver. They discussed hygiene and sanitation in and around the house.  Missions of Hope nutrition officers also paid them a visit to educate them on proper nutrition for Gift and Gift’s younger uncle. As a result Gift’s health has improved, she comes to school on time, clean and neat as advised by the social workers. Thanks to MOHI’s feeding program, even if there isn’t any food in the house when she comes to school she is assured of two meals a day.

Gift’s grandmother still sells items in town. She says business has not been easy because of the county officers. The social worker has talked to her about saving so that she can start her own business. Right now she earns a commission from the goods she sells. If she is able to start her own business, she can be closer home, rather than coming home from town very late.

Gift’s uncle was recently also recruited at Bondeni Center in pre-kindergarten at the beginning of the 2022 school year.