Greetings from the Baba Dogo center! Another amazing school term has come to an end and we want to share some of the highlights. Thank you for your support and partnership as we work together to transform lives through Christ. 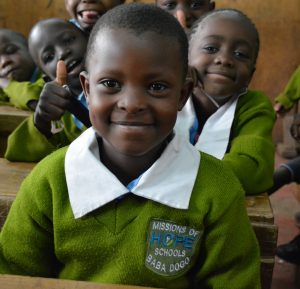 A family came to our attention during our social workers’ home visits to the neighboring community of Kasabuni. While going to visit other MOHI parents who live in the complex, they noticed a woman sitting under the staircase. The social workers found her there each time they visited the venue and became curious. After talking to her they discovered that the woman was heavily pregnant and almost due. She also had two other children; a seven-year-old daughter and a one-year-old son. On further investigation, she informed them that she lived under the staircase and at the mercy of well-wishers.

The woman said her name is Mercy* and everything changed in 2020 when Corona hit. She had been married and they were living in Baba Dogo. In the middle of the pandemic, the husband lost his job, he was unable to provide for his family, the rent arrears accumulated and the landlord evicted them from his property. Prior to eviction, the family had sold their belongings to keep afloat until they didn’t have any belongings left. The pressure became too much, with another baby on the way. Mercy’s husband left, and to this date, they don’t know his whereabouts.

Mercy relocated to Kasabuni to seek refuge with her sister. But upon arriving, she found out her sister had relocated to their upcountry home when her family couldn’t cope financially as well. That’s how she found herself living under the staircase in the building where her sister initially lived.

The mother was hopeless, more so with the oncoming baby. She didn’t have anything in preparation for the baby. She couldn’t do any casual job as no one was willing to hire her in her condition. Joy*, her 7-year-old daughter, also was not in school due to a lack of finances to pay school fees.

We counseled her and prayed with her. We also mobilized mothers in the area to support her with food and clothes as we worked on the solution.

We linked her to the Community Health Workers and Ante-Natal (pregnancy) clinic where she would get care. One of our parents volunteered to host her and her children until she got back on her own two feet. The Baba Dogo Center was able to provide food for the family and they also benefited from the food baskets that MOHI issued to the families to cushion them during the pandemic. The mother also got baby clothes and hygiene packs.

Mercy’s daughter was recruited into Missions of Hope in 2021 and was supported by the Center to stay in school. The social workers had counseling sessions with her and evangelism also took place.

Mercy later gave birth to a healthy baby boy who is doing well. She got a job through the help of a fellow parent as a housekeeper and has managed to rent a room and buy essential household goods and is now independent.

The mother joined a parents’ group and through the group, she has grown socially, spiritually, and been empowered economically.

Her daughter is also doing well in school and her health is good. Initially, she had recurring respiratory infections but was treated at the MOHI clinic and she is progressing well. She is very jovial and loves school very much. She wants to be a teacher when she grows up. The family attends a church in their local community.

We thank Missions of Hope for educating, empowering, and restoring hope through the love of Christ.