We give glory to God for helping us complete the third term of the 2021 school year. We are so grateful for your support and partnership as we continue working together to transform lives through the hope of Christ. God bless you.

Sponsor a Child at Area 2 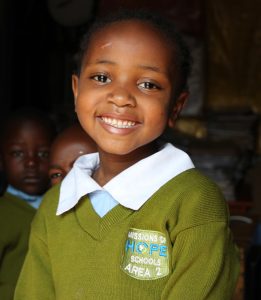 *Anna is a single parent of two girls, one of whom is a kindergarten student at the Area 2 center.

When we first met Anna and recruited her daughter *Amina, we found her selling alcohol and khat – which is a stimulant drug. We later came to learn that not only was she selling these illicit items, she was also using them and appeared to be addicted to them. The lifestyle that followed the trade that Anna was in left little to be desired. It had resulted in the birth of her two daughters, fathered by two different men and Anna was not certain who they were.

She was in poor health, appeared weak, and fast deteriorating as a result of not eating the right food. Her children were not any better since they too were malnourished and weak. Amina had a hard time settling into school; she was constantly late and would also skip school altogether. Then even when in class, she was absent-minded, unable to concentrate and this was affecting her academic performance.

In order to reach Anna, we started conducting regular home visits where we shared the love of God with her and also counseled her. We set up sessions with her every Tuesday and Friday and incorporated the help of one of our parents who had a similar story as Anna but has since changed. This made a huge difference because Anna was able to believe that God who changed this other parent’s life could also change hers. She did finally give her life to Jesus Christ and we immediately connected her to a local church where she was enrolled into the new believer’s foundation classes.

We then assisted her to get into a care group and the women in her group gave her a loan which she used to start a food kiosk. This has helped her stay away from the illicit trade she was engaging in. She also moved away from the area where she was living and now lives near our school which is also in close proximity to the church where she has been very active. She sings in the church choir and is serving God wholeheartedly.

We can see the difference in Anna’s life when we make the home visits. She is happy, her countenance has completely changed, she looks healthy and the home environment is clean and well-tended. Her children are also thriving. Amina now does not miss school and is no longer distracted in class. She is also healthier and now more interactive both in class and outside with her classmates.

We are so grateful to God for the transformation witnessed in this family! We continue to pray for them that they will grow even stronger in the faith.